The NGSS program is deploying modern, flexible technology to advance Penn's missions of teaching, research, and service. The University's decentralized structure, along with the interdisciplinary strength that distinguishes Penn among its peers, demands core student information systems and work processes that facilitate collaboration across units, streamline administrative processes, and provide robust and friendly self-service capabilities.

In late 2015, the NGSS program launched the first full release in its Pennant suite of systems: Pennant Accounts.

In partnership with Deloitte, the NGSS program is now focused on Pennant Records, which is modernizing student academic records and registration processes, and Pennant Aid, which supports Penn’s leadership in making an unsurpassed education accessible regardless of need.

An early milestone in this phase of the program was the launch of Penn's first online University Catalog, describing all of Penn’s courses and programs at the undergraduate, Ph.D., and research master's levels, as well as academic policies and resources. Heavily used from its first day, the searchable, mobile-friendly Catalog showcases Penn's academic opportunities and degree programs for prospective and current students, the larger Penn community, and the public.

Hundreds of members of the Penn community have already contributed to the NGSS program's transformational advancements in Penn’s student-related electronic infrastructure. Work continues with an active team of more than sixty participants. The program's accelerating momentum testifies to the creativity and commitment of collaborators across campus and beyond.

The graphics below provide a visual overview of the program: 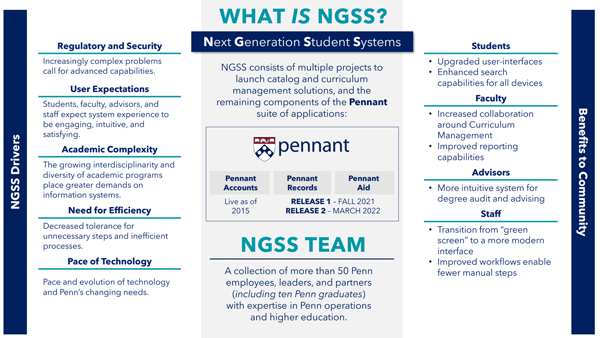 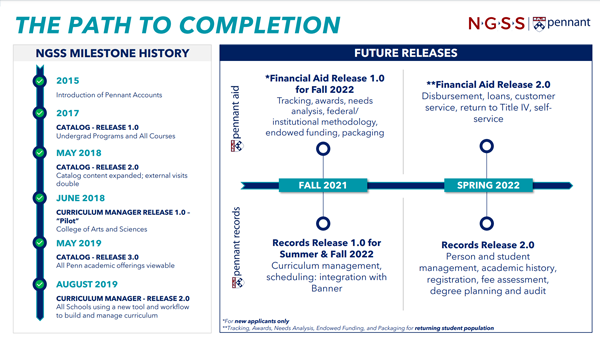